*This story is an excerpt from my book, Baby Ecology*

When I was a new mom, I read one baby sleep story after another; I was curious about the ways other families approached baby sleep (and looking for a glimmer of hope, or, rather, sound sleep ahead). So I thought I'd share my middle daughter's baby sleep story, and how I used my knowledge of baby sleep to gently guide her towards self-settling.

The gift of time

I hadn’t envisioned a postpartum babymoon when preparing for my second baby’s arrival, but I got one. A difficult birth left me homebound and unable to lift anything heavier than my baby for a month. It ended up being a physically challenging yet special time, as all I needed to do was heal and get to know baby T. My partner, family, and close friends generously took care of the rest.

By then I knew a lot about baby sleep; I also had an open mind and time to think, watch, and wonder. I wanted to eventually arrive at a point where my baby slept on her own, but where both she and I knew that if she needed me, she could call and I’d be there for her. I wanted her to be in tune with her body and to see sleep as safe and pleasant. To get there, my goals were to help her stay well-rested and to gently guide her toward independent sleep (aka smoothly connecting her sleep cycles).

Baby T came into the world strong, calm, and gentle. In the early weeks, she would sleep for a long stretch of 2 to 4 hours during the day, nurse for an hour, and go back to sleep. She was a big baby and gained weight well, so our doctor did not suggest waking her for feedings. At night, she slept in short stretches and stayed awake and alert for an hour and a half in between.

To support a gradual shift from the “day-night confusion” to more night sleep, I left the curtains open during the day and kept the room dark and quiet at night. In those early weeks, I accepted the ultimate gift of time with my new baby: I slept next to her when she slept in her in-bed bassinet; I watched her quietly; and I slowly got to discover baby T, myself and my partner as parents of two, and my firstborn as big sister.

By 5 weeks, T had consolidated most of her sleep into nighttime. She was going to bed at around 11 p.m. after a simple but consistent bedtime routine of a warm bath and a long feed, would wake up around 3:30 a.m. and again at 6 a.m., and then get up for the day around 9 a.m. During the day she would alternate between 40-minute naps and wakeful periods of about an hour and twenty minutes, sometimes less. Most of the time she’d fall asleep nursing, but when she didn’t, I would put her in her bassinet and lie beside her, gently stroking her forehead; sometimes she’d drift off to sleep on her own and sometimes she wouldn’t. Holding her upright a certain way against my body for 10 minutes after a feeding helped her burp and made her more comfortable before bed.

By 7 weeks, T was going to bed at 9 p.m., waking up twice to feed, and getting up for the day at 8 a.m. She stopped falling asleep while nursing at bedtime, but would drift off with a pacifier while I stayed near and held my hand on her forehead. I found it helped to do the last step of our bedtime routine with lights off; otherwise the change startled her. I also found that baby T needed her diaper changed several times during the night, but she stayed more settled and relaxed if I changed her after she fed for a while. Following the diaper change she would feed some more and drift off to sleep.

At 2.5 months, T was going to bed just after 7 p.m., waking to nurse once or twice, and getting up at 6:30 a.m. Her awake windows between naps were still about an hour and twenty minutes long, and her naps were still short. She took most of her naps in the crib now, but I carried her in a wrap for her late afternoon nap as we went for a walk in our neighborhood.

By 3.5 months T’s first morning nap lengthened to over an hour on most days. She was now taking three naps a day and falling asleep on her own as I stayed in a chair beside her. She no longer used a pacifier, but began sucking her fingers. She woke to nurse only once most nights. 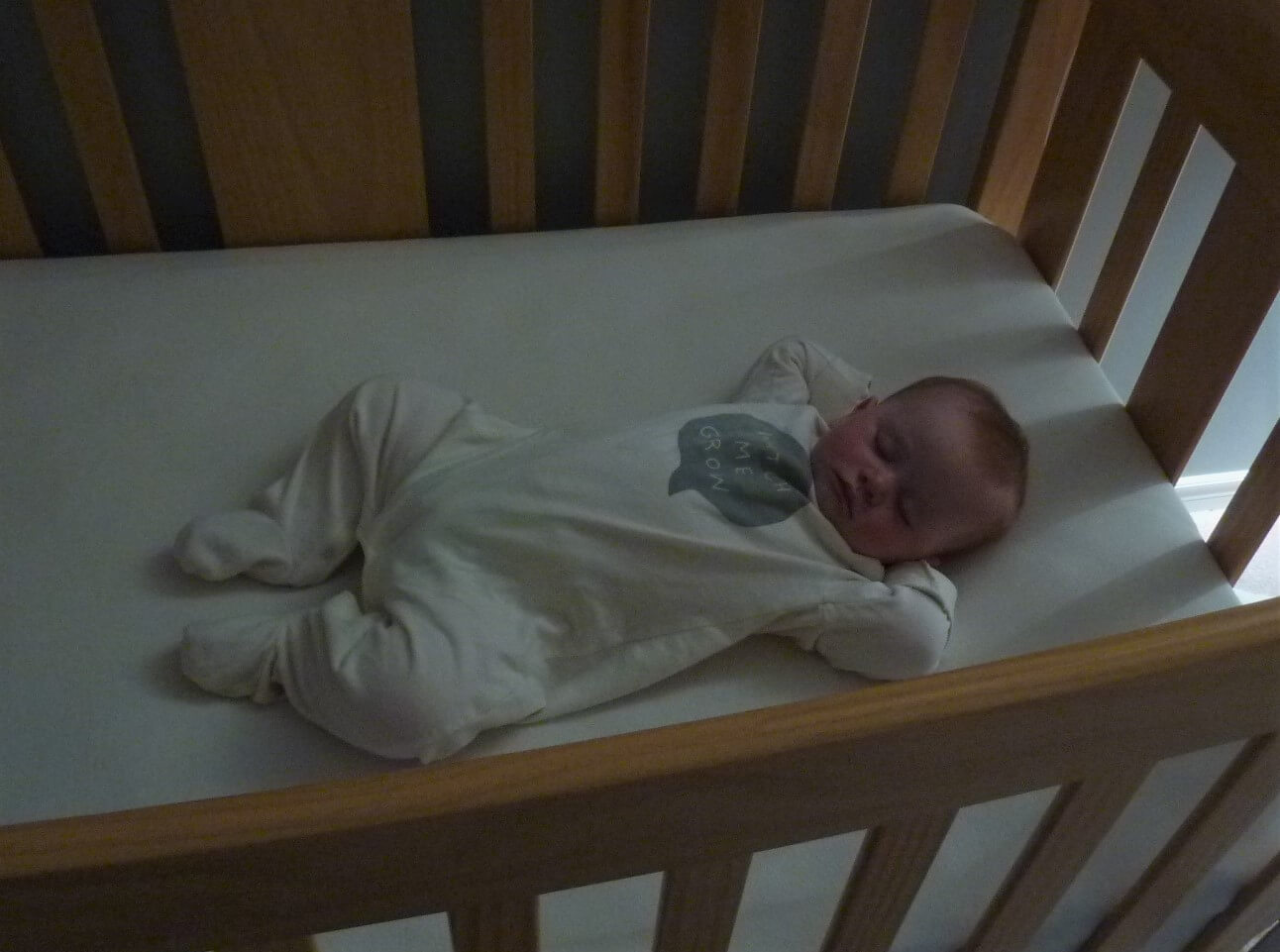 At 4.5 months, T went through a sleep 'regression' (really a progression): she began waking frequently at night and staying awake for a while, often an hour or more. Sometimes she re-settled on her own; when she called me, I nursed her. No one was getting much sleep around that time; even when T did not call out we could still hear her rustling, babbling, and rolling from side to side.

I knew that I could quickly nurse or hold her back to sleep, but that would not give her a chance to practice settling on her own. I found it challenging to let her stay awake like that and worried that she was getting overtired. She took 2 naps during the day, each 1.5-2 hours long; when she seemed tired or cranky in the late afternoon we either fit in another nap or moved her bedtime to 6 p.m.

At 6 months, T began sleeping on her tummy. She still woke a lot at night. She was now sleeping in her own room and our bedtime routine was longer: bath, massage, a book, a song, and a feeding. She self-settled for some wakings and I nursed her when she called. But now if she asked to nurse less than two hours after the last feeding, my partner would tell her it was time to rest and stayed with her if she got upset.

Self-settling and sleeping through the night

When T was 7 months old, we went on a two-week-long trip. We kept her routine as similar to our home routine as possible and helped her gradually adjust to the new time zone. I expected her sleep to become disorganized during the trip, but she woke only once or twice per night. A couple of weeks after we returned home baby T began sleeping from 6:30 p.m. to 6:30 a.m., with naps at 9 a.m. and 2 p.m.

Fast forward beyond the first year: T transitioned to 1 nap a day at 16 months and napped every day until she turned 5 years old.