“Container baby syndrome”: what it is and how to avoid it 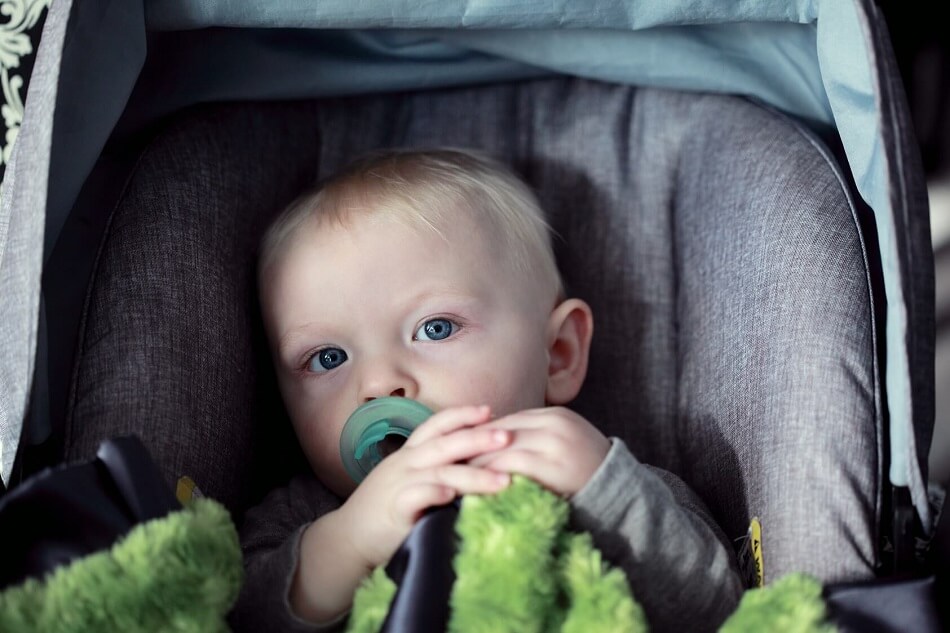 There is a good chance you have come across a term “container baby syndrome” somewhere on the internet. I haven’t been able to find its definition in the scientific literature or any official documents of the American Academy of Pediatrics. The American Physical Therapy Association uses this term to describe a collection of movement, behavior, and other problems seen in babies who spend too much time in devices (or “containers”) that inhibit movement.

“Baby containers” include often-necessary devices like car seats and strollers, but also baby play equipment: bouncy chairs, Bumbo-type moulded floor seats and other sit-me-ups, swings, exersaucer-type activity centers, and other seating devices. I’ve heard moms jokingly refer to these seats as “the circles of neglect”. They are certainly convenient for parents, and babies often seem like they are comfy and having fun.

How much time is your baby spending in containers?

When my eldest was a baby, our living room was taken over by an exersaucer, two playmats, a baby lounger, and a Bumbo seat. Whenever I needed to get something done - prepare a snack, clean up, or go to the bathroom – I would pop her in one of those devices. 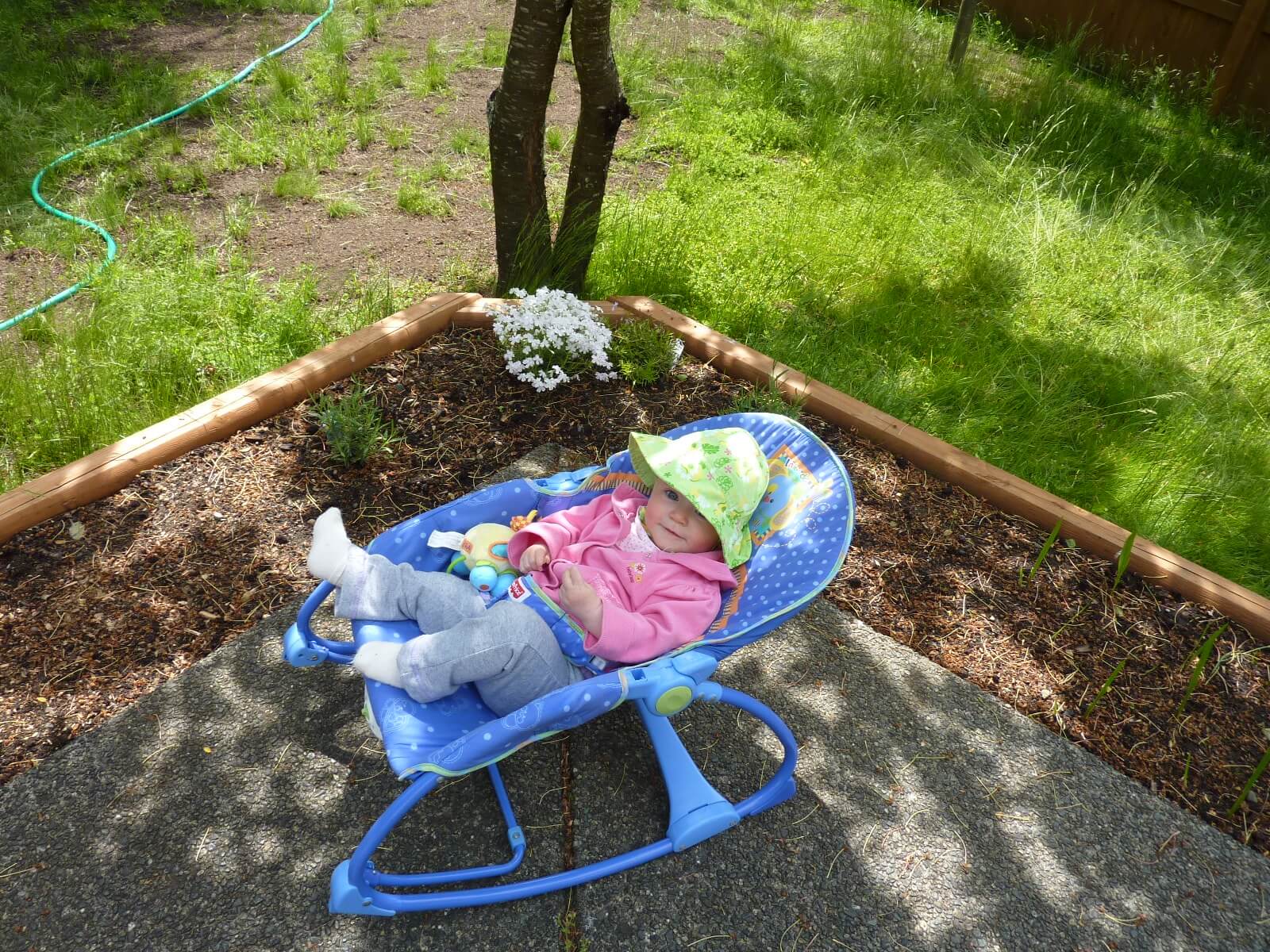 But one day, I added up the time she was spending in these devices, plus her stroller, high chair, and car seat. It was quite a bit.

Give it a try and see how much time your baby is spending in containers – especially relative to the total amount of time she or he is awake during the day. It can easily be 50% or more!

8-month-old baby Kai woke up, had breakfast in his high chair, and played in an exersaucer activity centre. After his morning nap he went shopping with Mom; he stayed in his car seat at the grocery store. Back home, he had lunch and an afternoon nap, and went for a stroller walk with Mom and Dad in the early evening. After dinner, Dad placed him tummy-down on a blanket on the floor and offered him some toys, but Kai quickly got frustrated as the toys kept rolling away and he couldn’t reach them; Mom moved him to a bouncy seat from where he watched Mom and Dad clean up the kitchen. Kai then played in the tub in his bath seat, and went to bed. 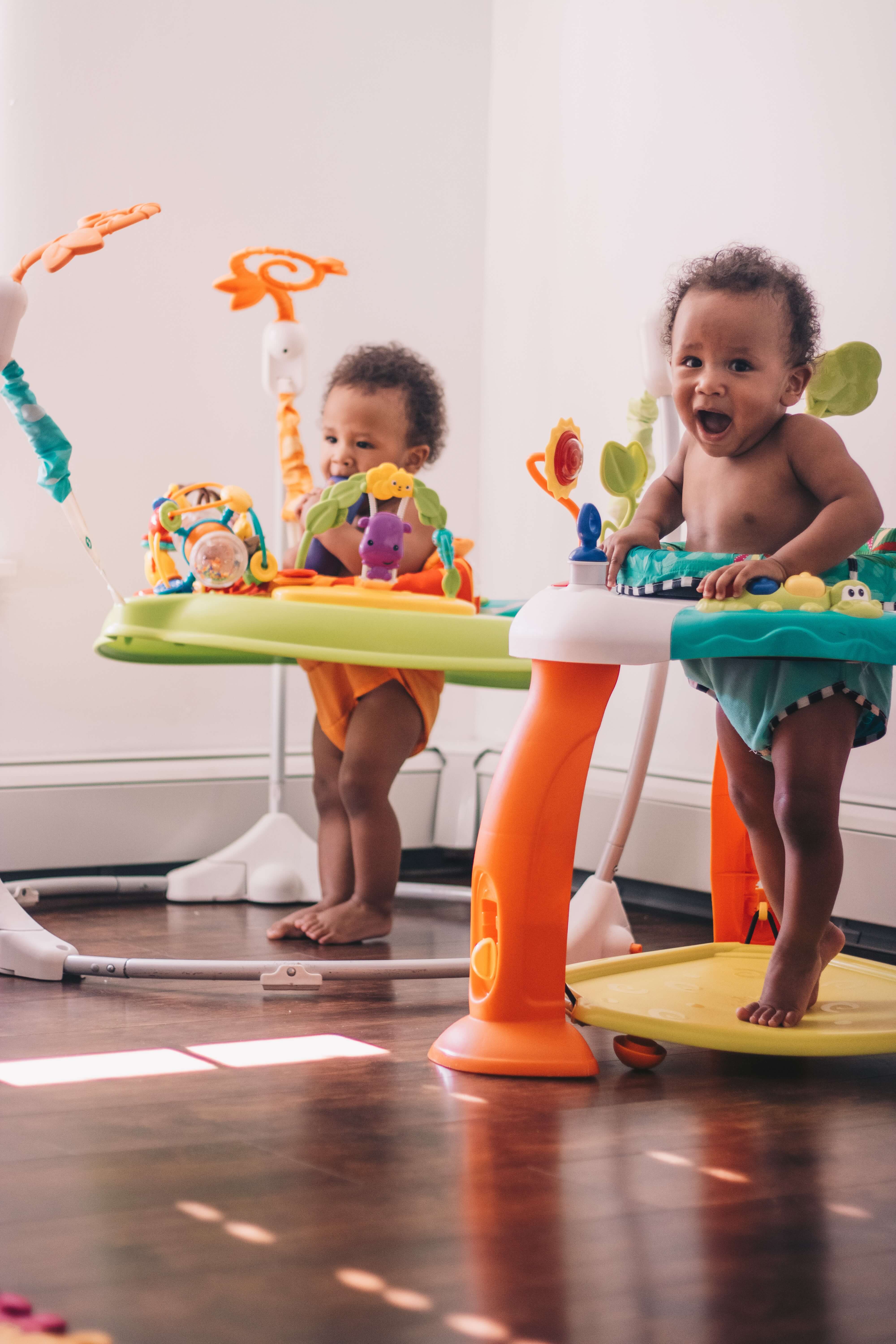 Manufacturers often claim that baby play equipment delivers developmental benefits. Yet, to my knowledge, researchers have not found any so far. In fact, one study showed a correlation between time spent in “containers” and slower motor development.1 (All babies still developed within the typical range, but this study didn't include cases of very extensive use. If it had, it is plausible that not all babies would have followed the typical motor development progression.)

According to the American Physical Therapy Association, staying in a container for a prolonged period of time can cause issues such as flat head, torticollis, vision problems, and decreased strength and coordination. This is not because containers are harmful themselves, but rather because of what babies are not able to do while spending time in containers, which is move naturally.

And natural movement is important.

In addition, some floor chairs, like sit-me-up or Bumbo-type seats, can put the baby in a position where their pelvis is tipped back, which isn’t optimal for posture and can put pressure on baby’s oesophagus.8

In our example above, Kai had a nice, typical day. But notice how much time he spent in ‘containers’ and how little free movement he had. His opportunities to wiggle and stretch were largely limited to the times he was picked up for feeding, dressing, and diaper changes. He is likely most comfortable in a seated position because that’s how he spends most of his time. He got discouraged when placed on the floor because playing there required strength and the ability to shift between positions, something he hasn’t had enough opportunities to practice. Understandably, he didn’t move much and protested until he was placed in a familiar seated position.

(This example is an excerpt from my book, Baby Ecology.)

What can we do to avoid “container baby syndrome”?

I don’t think most loving, involved, attentive parents need to worry about container baby syndrome in an “oh-no-my-baby-won’t-develop-properly” sort of way. For most modern families, it’s not possible to completely avoid “containers”: your baby must always be buckled safely in a car seat when travelling in a vehicle; a walk in a stroller or a baby carrier can be a wonderful part of your family’s daily routine; and safely placing your baby in a baby seat or swing from time to time is not going to be harmful in and out of itself.

But with that, there is quite a bit you can do to support your baby’s natural movement: 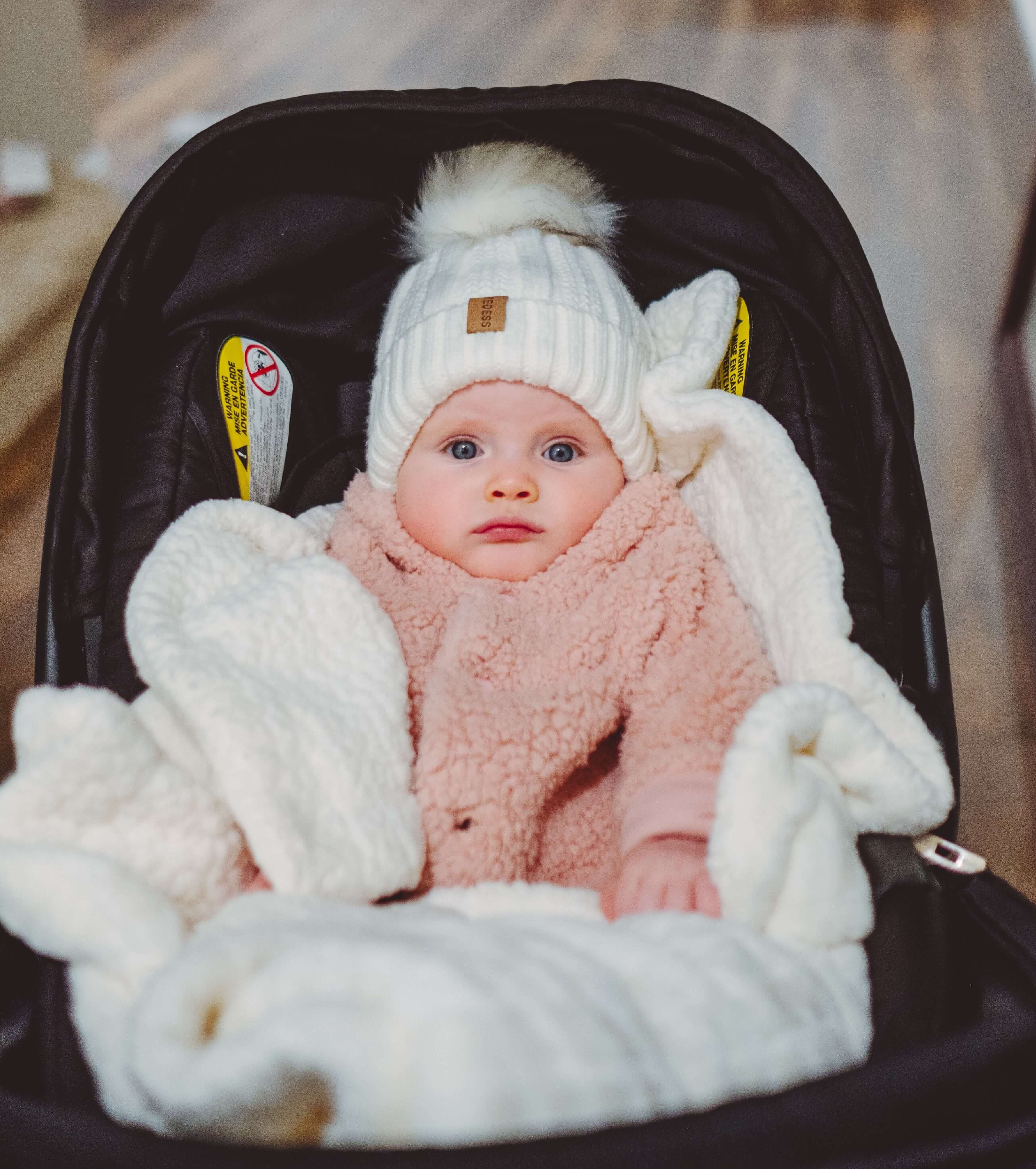 (Another great benefit of this approach: Some of the long-term benefits of breastfeeding have been attributed to the nurturing and close contact — the touching and gazing — breastfeeding provides.9 Whether you are bottle-feeding expressed breastmilk or formula, holding your baby will help you develop a close, nurturing feeding relationship.) 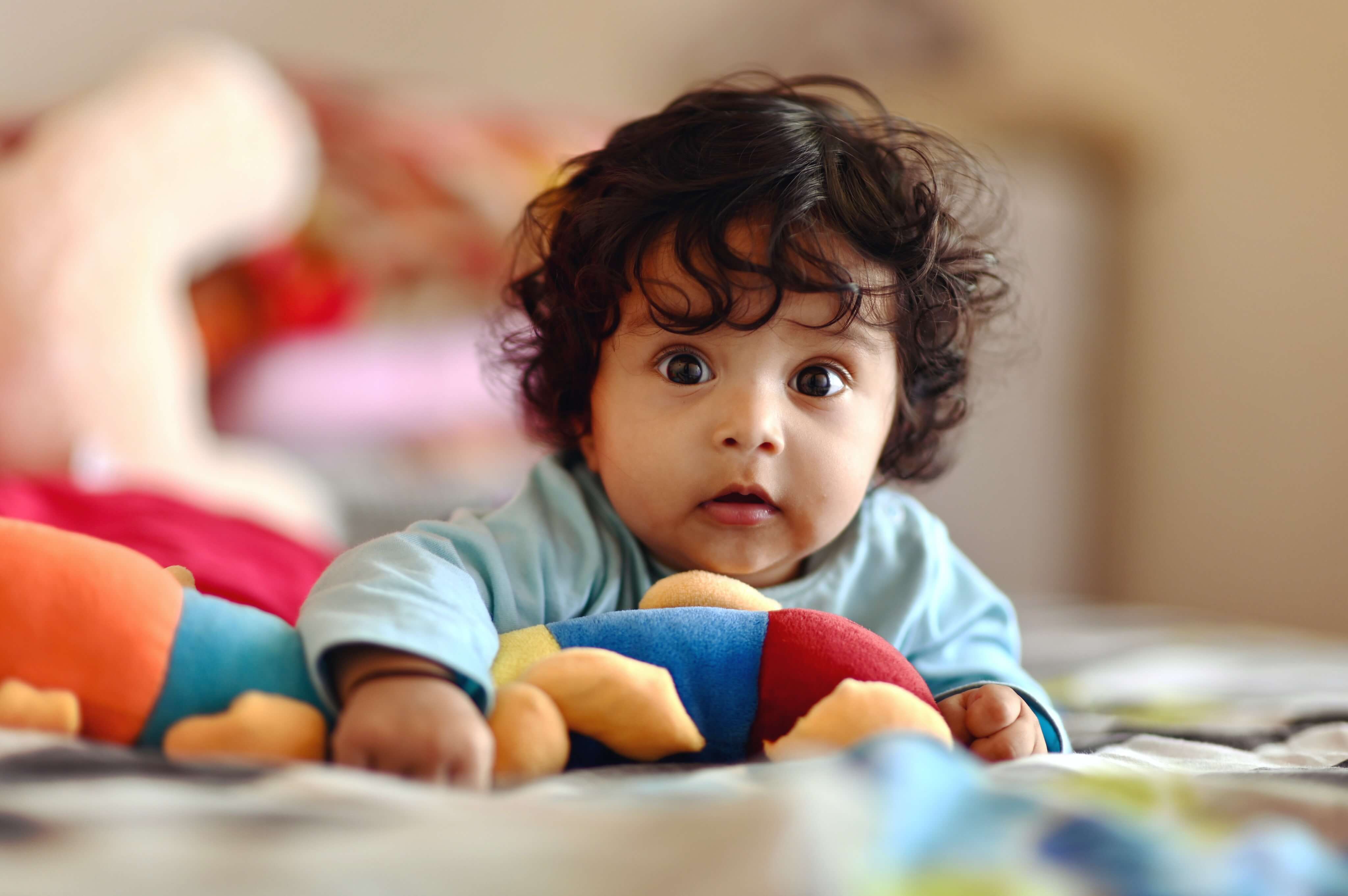 Finally, consider creating something that has been absolutely invaluable to me in raising all 3 of my babies: a 100% safe play space. This could be a play yard, a gated-off area or a whole room if your home allows.

The most important thing is that this play area must be absolutely, completely safe for your baby. It cannot be almost completely safe: “I just have to watch that he doesn’t pull on the blinds” means the area is not completely safe. Magda Gerber, the founder of the Resources for Infant Educarers (RIE), invited parents to think of a “safe place” as so safe that if you accidentally got locked out of the house, your baby might end up hungry and wet, but would be completely unharmed.10 Of course, getting yourself locked out of the house is never recommended, but you get the idea!

A simple way to create a play area is to enclose part of a room using safety gates. Gates may seem confining to adults, but to babies they can provide a sense of safety and freedom. As your baby figures out routines and patterns and becomes used to his play area, he will know that he’s free to explore. He won’t bump his head on a sharp corner or keep hearing “no” as he probably does when he navigates other spaces set up for adults or older children. This is why Janet Lansbury - whose work has been an inspiration and a source of learning for me over the last 10 years – coined the term “YES space” for it. Janet describes safe play spaces on her blog, in her book Elevating Childcare11, and her podcast, Unruffled.

How we set up 100% safe play spaces in our home

Is background TV okay for babies?

7. Bambach S et al (2016) Objects in the center: how the infant’s body constrains infant scenes. Pp 132-137 in: Proceedings of the Joint IEEE International Conference on Development and Learning and Epigenetic Robotics