Screen time for baby: the science behind the recommendations

Is screen time bad for babies? Are there any positives? Let’s look at scientific studies to find out. 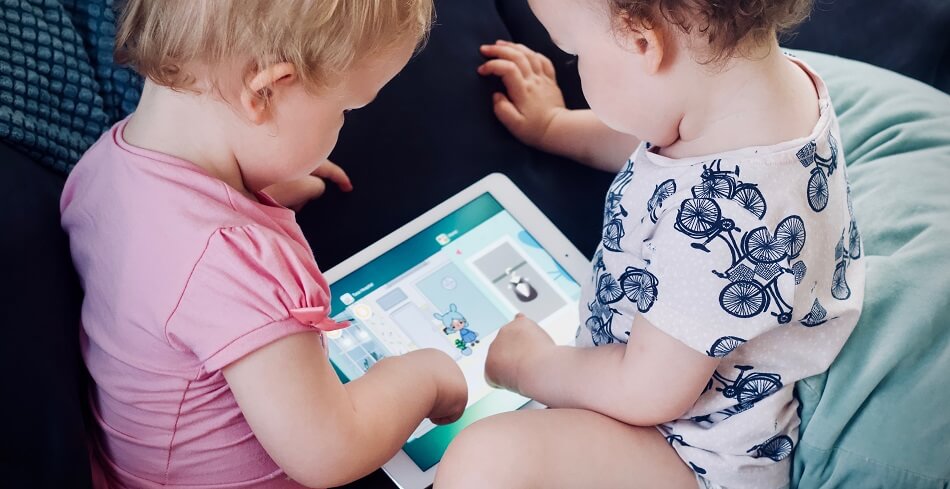 (This article is based on a chapter in my book, Baby Ecology.)

Today’s homes have many screens: TVs, computers, tablets, and smart phones. When is a good time for children to begin using them?

The American Academy of Pediatrics (AAP) recommended no television viewing for children younger than 2 years old in 1999. This recommendation was reiterated and extended to mobile technology in 2011. In 2016, the AAP issued an update recommending no screen time except for video-chatting for children under 18 months, and carefully chosen high-quality programming, watched with a parent, beyond 18 months. In 2019 the World Health Organization recommended no screen time for children under 2 years old.

How many families you know follow these recommendations fully?

Screen time can be a loaded and sensitive topic. I dove into peer-reviewed scientific studies to find out what the “no screen time for baby” advice is based on. I hope this article helps you make a decision that is best for your family.

First, a tiny bit of history

In the 1970s, most children began watching TV regularly around 4 years old.1 Then, in the 1990s, baby-directed videos and television programs like the Baby Einstein series and Teletubbies began to appear. Most were marketed as educational tools to promote brain development and cognitive skills. And by the early 2000s, the average age children began watching television became 4 months old. At 3 months, 40% of babies were already regular viewers; by 2 years, almost all babies were.1 In 2005, every fifth child under 2 years old in the United States had a TV set in their bedroom.2

Five-month-old Rylee is watching a television show. She is sitting very still in her baby swing and appears to be watching the screen intently.

Rylee can hear the sounds and see what’s happening on screen almost as well as her big brother and her parents. She can recognize simple shapes. But all she’s experiencing is a stream of flashing lights and colours with no apparent connection to each other, to the sounds she hears, or to the people and objects in her life. Rylee will not begin comprehending the show’s content or even sequences of events until she is at least 18 months old.3,4

In a large survey completed in 2006, parents shared their reasons for letting babies and young toddlers watch television, DVDs, or videos. Most believed the programs were educational and good for their child’s developing brain, and that viewing was enjoyable and relaxing.1

Unfortunately, neither is true. Researchers have been actively looking into the effects of television and video exposure on babies and young children since the early 1990s, and at this point science has given us some solid answers. Let’s take a look at the TV equation.

Screen time for baby: The negatives

There are two main negatives that are correlated with — and may be caused by — watching TV:

This is why baby Rylee in our example above is sitting very still and watching intently. Her brain is trying to figure out what’s happening (“Is this threatening? Is this important?”), but doesn’t get the chance to process any input.

Watching television is not relaxing for babies. In fact, it’s likely stressful and exhausting!

The pacing of television shows, even those designed for babies, is extremely rapid compared to real life. Sensory overstimulation may condition children’s developing brains to expect this level of stimulation and intensity in everyday lives.

It is important to note that these studies found a correlation between screen time and attention — not causation. In other words, we cannot confidently conclude that screen time, or screen time alone, is the reason for later attention problems. To arrive at robust conclusions, one would need to conduct experiments that are not possible for ethical reasons: thankfully, no researcher would purposefully expose young children to what’s likely to be detrimental sensory overstimulation to see whether it would cause hyperactivity or cognitive impairment. So all studies on television viewing and attention in children have been — and likely will be — observational rather than experimental.

Recently, however, an experiment was conducted on mice. Some young mice received excessive sensory stimulation: bright lights and sounds for 6 hours per day for 6 weeks (simulating a television-heavy household). These mice showed signs of impaired learning, impaired memory, increased risk-taking, and hyperactivity which researchers described as “ADHD-like.”10 We cannot directly extrapolate these findings to young humans, of course, but they are important to consider as we may never have much more definitive answers from science on this topic.

There are several other negatives. These are not directly caused by television, but stem from what babies are not doing or getting during the time they are immersed in screens.

These are, essentially, lost opportunities. Are they significant? They can be, depending on how much time babies spend watching. According to a large survey, 3-month-olds on average watch about an hour each day.1 This might not seem like much. But babies of this age sleep for 16 or more hours per day and spend another 3 or so hours feeding and being changed and dressed. So screen time takes up almost a quarter of their awake time. Being in a screen-free environment gives babies more opportunities for connecting, building strength, exploring, and learning.

What about TV being on in the background? Background TV still affects babies even when they’re not actively watching (more on that here).

Screen time for baby: The positives

What about the educational benefits claimed by the producers? The problem is, even if a show’s content can be considered educational, babies are not developmentally ready to understand it. Watching screens is a demanding cognitive activity, one that requires special forms of attention, perception, and comprehension.4 Babies develop these skills through exploring, connecting, and playing in the real world, not by watching screens.

Some programs claim to teach babies languages. The Baby Einstein series was inspired by the finding that young babies are sensitive to phonetic contrasts of any language, but at around 6 to 9 months they begin to gradually lose this generalist sensitivity: their brains focus on the language they hear most. So Baby Einstein videos exposed babies to the sounds of many languages and were supposed to help them remain sensitive to many phonetic contrasts, to facilitate later language learning. However, videos like Baby Einstein don’t work. A number of studies have now shown that babies learn much better from real people and real-life events than video — and that this “video deficit” phenomenon holds true until the child is 2 to 3 years old, and likely beyond.3,4,12 In 2009, Disney offered refunds on Baby Einstein videos because its claims of learning benefits were unsupported. That being said, a plethora of “educational” videos and apps for babies have been developed since.

Some media content producers claim that their goal is to promote child-parent interaction. However, studies show that most parents do not watch television with their babies or toddlers.1 (Understandably so – they are probably trying to catch a break.) And even when babies and their parents are watching together, they are probably interacting less than if they played with blocks, looked at a book, or went about daily activities together. 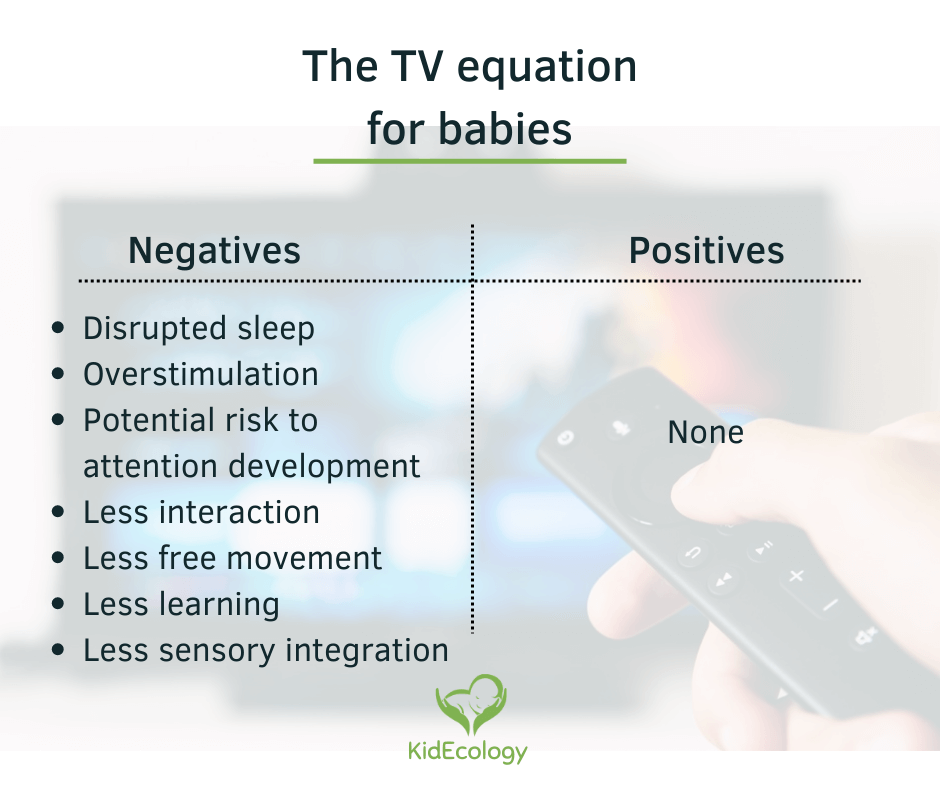 Overall, statements by television and video producers that their products are beneficial for babies are not supported by evidence. Most or all television and video content should not be marketed as educational or even developmentally appropriate for babies and toddlers. Yet there still appears to be a lack of regulation regarding such marketing claims.11

What about interactive technology?

But what about mobile electronic devices like tablets and smartphones? Many babies use their parents’ devices and may even have their own, made specifically for young children. The effects of mobile technology are not yet well studied, but the list of negatives described above likely applies. Babies under 1 are exposed to the same type of content they would have been watching on television, but now from a mobile electronic device.

Moreover, some of the negatives may be amplified. Electronic devices are portable; many attach to car seats and strollers, lending themselves as “electronic babysitters” to keep babies occupied during daily routines. This has the potential to increase babies’ screen time in a very real but not easily noticeable way. In addition, mobile screens are smaller and positioned much closer to babies than television screens. This could have an even larger impact on babies’ sleep because the blue light is stronger at close distances. Looking at screens up close for considerable amounts of time may also pose risks for babies’ developing vision.11 It may re-wire their visual systems toward up-close central fixation and lead to under-developed peripheral and distance vision.13 The degree of these risks is currently unknown.

Q: I want my baby to be screen-free. But how do I ever catch a break?

Consider creating an enclosed, 100% safe play area (or “yes space”) where your baby can play, move, and explore freely, with you or on their own. Read more about this concept and how we created ours here.

Q: My baby won’t eat unless the tablet is on. What can I do?

Begin shifting towards baby-led feeding, where you set up a nurturing feeding environment and provide nutritious foods at regular times and your baby decides how much of each food to eat and whether to eat it at all – without coercion or distractions. Find out more here.

Q: My baby enjoys pressing buttons and swiping a touchscreen on my phone. Isn’t this good for her fine motor skills and for learning how devices work?

Yes, screens (and electronic toys) can teach your baby how to press and swipe. But if you think about it, these tasks are very simple, can be learned any time in life, and are rather meaningless on their own. To use electronic devices in a meaningful way, one must first understand how the real world works outside of the screen. For example, as your baby plays with a toy drum or a spoon and a plastic container, she will learn that banging objects together makes a sound. She will also learn that the sound varies depending on how soft the object is and how hard she hits it, and that hitting water makes a splash; she will be using all her senses. If she’s curious about sounds, she’ll keep experimenting, which will advance her strength, fine motor skills, and sensory integration, and give her a sense of mastery. She won’t learn any of that from simply pressing a button or swiping on a smartphone to produce a sound.

And it does not show any positives.

How to create a 100% safe baby play area

10. Christakis DA et al (2018) How early media exposure may affect cognitive function: a review of results from observations in humans and experiments in mice. Proceedings of the National Academy of Sciences 115(40): 9851-9858